Ewald Tractor Co. was founded by my grandfather, Herbert John Ewald, Sr., in

November of 1948 along with his oldest son Herbert John Jr. (Red). The company was a Ford Tractor dealership and was originally located in downtown Seguin by the courthouse. In 1952 the business was moved to a brand-new building on Kingsbury Street in Seguin and operated there for the next 20 years.

During the early 1960’s Herbert’s youngest son Henry, my father, worked alongside his brother Red in Seguin and at a satellite location in Karnes City. By the late 1960’s Red managed the Karnes City store while Henry took over operations in Seguin. Eventually Red closed the dealership in Karnes City and began manufacturing fiberglass tanks and other products. In this he became quite successful with his own company, Red Ewald, Inc. By 1972 Henry had purchased the business from his father and moved the store to the west side of Seguin on Interstate 10.

Henry operated the dealership there for many years, enduring the hardships of the mid-80’s Texas recession by traveling throughout the country, buying used tractors and shipping them to Seguin for resale. By 1989 many tractor dealers in the area had closed due to a record drought and poor economic conditions throughout Texas. It was this same year that Ford Motor Company sold their tractor division to the Fiat Group which later renamed the tractor line New Holland. Also, in the same year, Henry added the Kubota line of tractors and equipment to the dealership in Seguin.

Throughout most of the 1990’s Ewald Tractor grew rapidly, adding Case and Massey Ferguson equipment as well as many other short-line brands. Also, during these years, I began working at the dealership as a mechanic’s helper and delivery person. In 1996 after graduating from Texas Christian University, I returned to the dealership and began work as a technician, then later as an equipment salesman. By 1999, I earned the title Sales Manager (because no one else wanted to do it) and convinced my dad it was time to expand.

In 2000 my dad retired from the business after almost 40 years and turned management over to me. That same year I (with my father’s co-signing of a bank note), purchased the assets of Greater Southwest Equipment: a Kubota tractor dealer with locations in San Antonio and Floresville. Sadly, on Christmas Day 2002, my dad died in an accident at his home in Seguin. It was devastating to me, my family and our company. He was 66. 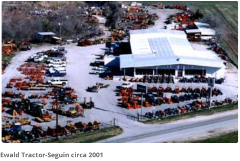 of Boerne on Interstate 10 and in 2005 we moved the Floresville location to a new building just north of the city on Highway 181.

Lanford Equipment Company in Austin was established by brothers Rex and Don Lanford in 1948 after they returned from service in World War II. Both men had degrees from Texas A&M and wished to start a business in the agricultural industry. They first set up shop in a modest rented facility, but by 1951 were able to purchase property and construct a building on Airport Boulevard in Austin.

The drought of the 1950’s was tough on the Lanford brothers, but with determination and hard work they overcame the hardship and built a solid business with a strong commercial following. In 1973 Don Lanford’s son, Bob, was released from the Army after serving in Vietnam and joined the family business. In 1977 an additional manager was needed to handle the increased volume, so a friend of the Lanford’s, Jerry Rutledge, purchased half the business and became a co-owner with Bob. The business continued to prosper, making their facility on Airport Boulevard no longer adequate.

In 1982 Bob and Jerry purchased property in Austin on Highway 183 by Bergstrom Airport and built a new larger building to accommodate the growth. However, the “bust” of the mid-80’s soon followed, leaving Lanford Equipment the only equipment dealer in the area to survive.

In 2003, Bob and Jerry opened an additional location just west of Austin in Marble Falls to serve a growing customer base in Burnet County.

The Merger of Ewald and Lanford

Throughout my tenure at Ewald Tractor, Bob Lanford, Jerry Rutledge and I developed a working friendship between our businesses and territories. When Bob and Jerry began considering selling their business, I expressed interest because it was a natural fit for our two companies and employees. By 2013 we struck a deal for them to sell Lanford Equipment to me and by mid-summer 2014 I built two new buildings in Austin and Marble Falls. The employees and I also decided to change the name of the company from Ewald Tractor to Ewald Kubota, Inc. to better reflect the description of our business.

Today, Jerry works as a salesman and comes in to work every day at the Austin store just as he has for forty years and Bob still stops by and shakes hands with his old customers on occasion.

In January of 2016 we bought the assets and assumed the territory of Taylor Equipment in Taylor, TX. The dealership was founded in 1985 by Raymond Lenz as a Kubota tractor dealership. By the early 20-teens, Raymond’s son Chad was managing the store but, in the summer of 2015, he was killed in an accident that stunned the local community. He was a well-liked young father and businessman and is sorely missed by friends, family and customers. Our deepest condolences to the Lenz family.

In April, we bought the assets and assumed the territory of Gulf Tractor Company, a Kubota and John Deere dealership in Corpus Christi. Gulf Tractor was founded in 1954 by John Beach as an Oliver equipment dealer and has continually served the Corpus Christi and surrounding area since that time. In 1984 Mr. Beach’s son Mike took over operations and was soon joined by his younger brother Bob. Mike and Bob expanded the business over time by adding John Deere, Kubota and other turf products. In 1995 they moved the business to South Padre Island Drive, a major highway running through Corpus Christi, and operated there successfully for many years. In 2015 the Beach brothers decided to sell the business and pursue other activities but, sadly, Mike passed away before his retirement. Bob decided to continue in the transaction and now enjoys fishing and hunting in his retirement.

In 2016 we recognized the growth of the North Austin area and decided to open a new store in Georgetown. That facility was completed in October of 2018 and does well selling all the Kubota products.

My office is in Seguin, but I visit each store often to talk with employees and customers. I’m at work every day and stay close with all our people and I’m proud to say that well over half of our employees have either been with Ewald Kubota or their former owners for over 20 years. I realize I am the steward of several great businesses with rich history and do my best to treat all our employees, vendors and customers with care and respect.

Your web browser is out of date.

Please download one of these free, up-to-date browsers for the best experience on our site